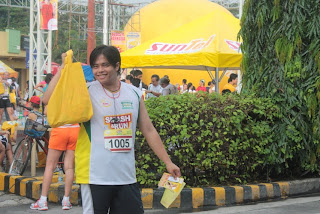 Yesterday was the Smash and Run held in Greenhills Shopping Center. I spent the night before at Anne's place so we cloud go together to the venue. I ran the 10K with Tin Ferrera and then Anne and Donna ran the 3K. Eggy and Paula ran the 3K as well. I was signed up by Donna since the event was sponsored by Sun Cellular. She was waving all the way to collegues she sees everywhere. The event turnout was quite good. I can see familiar faces of people I have seen in the previous races I have joined.

We arrived at the venue at around 5:30 and looked for Anne's brother to give out his and her girlfriend's race packet. We then proceeded to the starting line. While walking, Tin handed me a Jelly Bean. It was the power Jelly Beans with electrolytes that will help you boost your energy. I immediately took one from her. We then walked and I felt that I needed to use the rest room. I was pointed to a portalet by one of the guards. When I arrived at the area of the portalet, there is a long line for the guys. I was the 6th guy in the line and there is only 5 minutes before gun start. At about a minute to go, I was still third in line. The guy in front turned back and saw that my singlet was red (indicating I'm a 10K runner)and asked me if I want to go ahead. I did and was very thankful to the 2 guys in front of me. Whoever you are guys, kudos to you! :)

When I went out of the portalet, the gun was fired. I immediately ran to the start line and was able to go with the flow of runners starting. I then ran through my normal pace. I was quite excited at this time because it was my first time to run in Greenhills. I am not even familiar with the place that much. I just went with the flow. I was quietly pacing with a female runner who is an iamNinoy runner. I think we are of the same pace so I ensured I do not lose sight of her. Since I was pacing with her, I was able to fight the urge to walk for the first 4K which was a very good distance already. I then started brisk walking by then briefly and ensured I run back after a block or so. I am quite happy that I can still see the female iamNinoy runner. The track seems like forever since there are a lot of turns and streets. It was fulfilling in a diffent way since I was able to sightsee.

Notes about the event:

The event was a success. Nice turn out since there are pros and newbies in the crowd. There are the endorsers of Mizuno, pro runners wearing the tights, newbies just enjoying the 3K.

The starting/finish line was nice looking as well. All the sponsors are visible and they are even allocated with tents inside the event area. There is a stage with a host which entertained most of the people in the crowd. There are however some things I was expecting to be in the event which was lacking. The presence of TV personalities. I thought the event will be attended by Sun endorser Iya Villania and honey Drew Arellano since both of them are runners. It would have been great if both of them we're there to have handed some prizes and ran the race as well. Maybe there is a conflict in their schedule.

The water stations are also strategically placed. I am surprised however that there are no power drink stations considering Rush is a sponsor. We were contemplating after the race that there might be a fall-out of the sponsorship resulting to the non-participation of Rush. I was contented however to just drink water. The thing I believe should be improved in this race is the marshalls attitude. I heard from the grapevine that the marshalls are trash talking the last runners for some categories. People might take this positively or negatively. Some may take it lightly as something funny while some of them might get hurt that there are already the last runners and there are people who are not supportive of them.

I also would like to commend this event for something I found nice. It might be a small detail but I really liked it. The lace they provide when you turn around a specific u-turn slot are not notched. They are melt together hence there it is not distracting to wear around your neck. Another thing I liked about this race is the ensured loot bag. From all the races I have joined, I have yet to retrieve a loot bag. The event provided a loot bag with a water, C2 and bag of healthy chips. This is a good practice since most runners are thirsty or hungry by the end of the race.

All-in-all, this race is a very good one. It is well attended and the logistics are up to standard. I am looking forward to another race sponsored by the Greenhills Shopping Center. 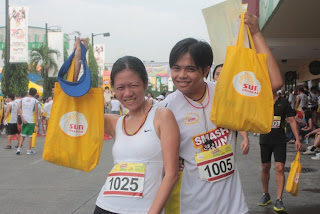 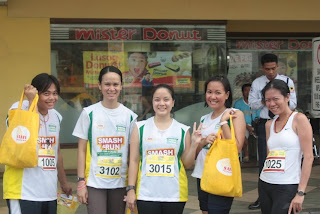 Me, Paula, Anne, Donna and Tin (Eggy taking the Photo)