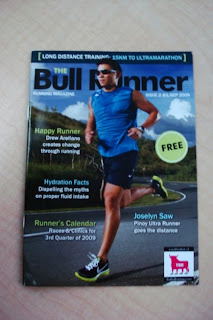 It was my first time last Friday to be able to step foot on the Runnr. I was amazed that there is a store solely dedicated for running. You can find there shoes, outfit and all items you might need for running.

I had my running tested and I found out that I am a forefoot runner. They guy who assisted me told me that the shoes I bought (Lunar Glides) is quite soft for me and I should wear ankle sleeves to support my aching ankle. I did just that and while I was paying at the counter, I saw the stack - of the Bull Runner Magazine.

Without hesitation, I got hold a copy for myself. The magazine is already the second issue. They featured on the cover Drew Arellano, who I didn't know had a passion for running. The magazine also featured him in a 3-page article (and photos) where he shared how he influenced his siblings, father and his girlfriend Iya to share with him his passion. I am happy that running has been getting into everyone now.

The magazine has a lot of advertisement that are relative to running. I personally find these interesting - Photovendo, Gatorade and Dole. I did not know that there is an online store selling photos of running. This came quite handy when I ran the Kenny's Urbanite. Photovendo was there to take our photos and was up 2-3 days from the event. For those who joined the run, visit http://urbanite.photovendo.ph to see your photos. Disclaimer: Almost everyone looked weird because the photos where taken a couple of steps from the finish line. The Gatorade advertisement was something I really read. It was full of information why a runner need a sports drink and water. It gave me more information so I can strategically drink on stations for my next runs. And lastly, I didn't know that banana was for cramps until I saw Dole's advertisement. Originally, I thought the reason for eating banana is to have a full stomach but apparently, it has more use that that.

I would give 4 thumbs up -including my running feet- to the Bull Runner Running Magazine. It straightens up one's knowledge on running and the things accompanying it. The magazine is specially tailor made for a runner because it was done for and by a runner.

Congratulations Jaymie on this wonderful creation and I am looking forward for the next issue. For more updates, visit her site at http://thebullrunner.com.