I started running around April not to join races or marathons but to get fit and shed some pounds. I then run at Roxas Blvd without any pressure or goal. My main aim then when I run is not to get mugged.

But when I heard about the Milo Marathon, I got intrigued and did some research on my own. I learned that everyone could join and its not actually a competition but an event fostering camaraderie and brotherhood. I then signed up with my P&G friends for the 10K run. Initially, my runner friend told me that I was aiming for too much. I should have started at 5K. But then, I have signed up already and there is no turning back. I then trained harder and harder. Got tips from friends and read a lot of running blogs.

I then got my shirt for the race. A size smaller from what I signed up for. But it did fit me anyways so it was not that much of an issue. My problem then was, I did not get my bib. All the while, I thought it was going to be distributed at the gun point but I was mistaken. An hour prior to the gun start, I saw everyone in their bib. I panicked and tried to look for the technical booth. After 40 minutes of looking, I saw a friend of mine and pointed me to the right tent. I then gave my name to the female attendant and they were able to retrieve my official number. They wrote it in a half sheet of bond paper and told me to surrender upon finish. I hid it in my short’s pocket and ran to the gun point. I arrived around 2-3 minutes before Bayani Fernando shot the gun. Whew. Talk about photofinish.

I was able to finish the 10K without much problem. I got all the water and Gatorade I needed from the stations which I felt was quite adequate for the distance that I ran. The finish line did not refelct the time of finish for the 10K and I just assumed tat my time was 1:30 based on the amount of songs played in my iPod.

I then googled Milo Marathon the day after and saw that they do get the finish time of each finisher. I was quite sad because I have this feeling that mine was not registered due to my lost bib. To my surprise, it was registered and I was able to finish my 10K in 1:26:01. Not bad for a first timer. 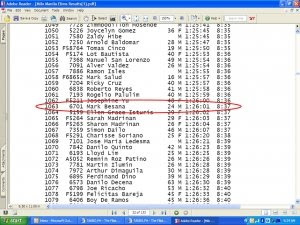 PS. I found my bib. It was stucked to the packet where I got my shirt. Lesson learned.
Posted by Mark A. Besana at 9:28 PM